So our apartment search has been an adventure to say the least.  Martin has been looking for 4 weeks straight during any spare moment he had.  We had a few criteria:  didn't take up more too much our our  income (we want to travel as much as possible), close to MRT (we won't have a car), not too far from church, ideally close to middle of town & work, and in a cool neighborhood would be awesome.

A week ago we thought we had found everything we wanted.  He wrote a letter of intent.  As for me, I had moved in in my mind and had placed furniture, decided where my kids would apply for school (more on that later), figured out a running route and where I would do all my shopping.  I had even gone so far to imagine myself poolside.  We had asked around church and everyone said it was a great neighborhood.  We even had a friend who had sent us a walking tour she had done of the neighborhood.  It had amazing food and architecture.

Martin went to the HR department to get a check for the fees and the woman asked him where the apartment was.  He told her and she asked if he knew it was "the red light district!!!".    Apparently the Mormons don't do that scene and had no idea what the night life was like in the neighborhood!  Needless to say Martin backed out of the apartment and resumed his search.

A few days later, in a panic (we ship in three days and needed an address for a destination), He found a penthouse suite 30 minutes outside town where "locals" live!  Martin said it will be a "culture shock"!   We have 4 bedrooms, plenty of space, and are near the MRT and a wet market.   The best thing about the apartment though is the balcony's and patio space.  I guess I will be making a trip up to Home Depot before our pack out on Friday for some patio furniture! 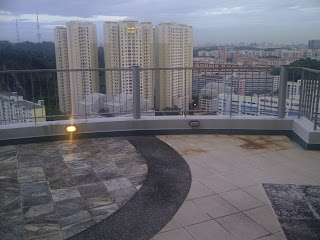 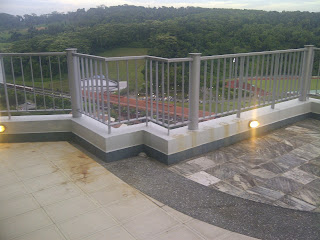 Hope to see all of you sitting on my balcony in the near future :)!
Posted by JCV at 3:41 AM 7 comments:

So it happened Sunday... Our first big cry.  It was significant for many reasons.

1.  I had been telling everyone that the girls were totally happy about the move and had no apprehensions.

2.  I knew that with a house full of girls there was bound to be a moment when the crying moved from I am a baby and don't know how to express myself to I am a girl full of emotions that only come out through tears.

AV came home from church feeling a little sad... I asked her what was wrong.  She burst out in tears saying that I had not informed her that it was our "last Sunday."  (They had sung goodbye to her)  I was at fault for not preparing her but .......how was I to know that it would not elicit the same response (elation) that has come every other time someone has mentioned the move?

It was a real bonding moment between the two of us.
Posted by JCV at 10:28 AM 3 comments:

So today was the day that I completly fell apart.  After many many weeks of going non-stop my brain was finally on overload and I could take no more.  I felt my anxiety reaching new levels.  I had already planned a night out with my former primary presidency and so I had a sitter.  An hour before I was to leave my anxiety was so high that I thought I would burst..... And then I had an idea.... SPA WORLD!  Spa World (very poor name) is a Korean Bath house that is open all night.  I went to my dinner and then I jetted over to NoVA and had a great soak.  All of my anxiety was left in the Bade Pool.  Ahhhhhh.  Now on to tomorrow....
Posted by JCV at 12:01 PM No comments:

And We are Live!

So I have had many requests to start a blog given our pending move to Singapore!  I have always been very sure that I would NEVER start a blog.  Who cares enough about what I am doing?  I have always found them to be a little egotistical (sorry to all my blogging friends)... let's put the prettiest face (Mormon mommy blogs) that we possibly can on life.  Argh!  So I promise to keep my musing short, pictures plentiful, and keep it real.....

The last few weeks have been nonstop crazy.  I have been waking up every morning and praying for guidance for the day.  I settle on several things that need to be done that day and I go and do.  I can not possibly think of everything that needs to be done or I would go crazy.